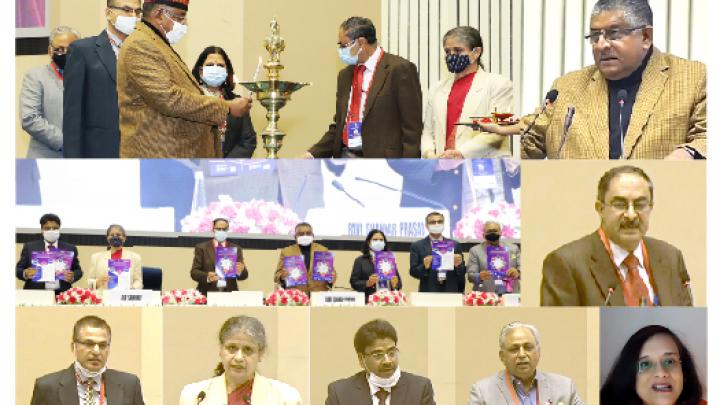 The event started with the Lighting of the ceremonial lamp by Shri Ravi Shankar Prasad, Hon'ble Union Minister for Law & Justice, Communications and Electronics & IT in the presence of other dignitaries.

Shri Ravi Shankar Prasad, Hon'ble Union Minister for Law & Justice, Communications and Electronics & IT in his inaugural address outlined the objectives of the government conceived in the digital field. He further highlighted that in the march of digital progress the government, governmental bodies, and private sector have to become stakeholders. He said that Digital India is a movement to empower the ordinary Indians with the power of technology. It acts as a bridge to the digital divide and brings in digital inclusion and emphasized on made in India 5G technology to roll out faster than the world. Shri Ravishankar Prasad also urged NICSI and NIC to develop India as a leader in the Data Economy.

Shri Ajay Sawhney in his speech, highlighted the milestones achieved by NICSI and mentioned the conceptualization and implementation of national public digital platforms. He emphasized the need for harmonizing the stand-alone government products and services and looked forward to making it a single product that will be available for the public with ease.

Dr. Rajendra Kumar, Additional Secretary, MeitY, and Chairman, NICSI made his speech mentioning that over the last 25 years, NICSI has emerged as a premier IT service organization catering to the requirements of government departments both at central and state levels. He highlighted the two key elements "Ease of Living for citizens" and "Ease of Doing Business for the businesses" which can bring a complete transformation in the way government departments perceive digital, use digital, and in the way citizens and businesses can use that interface for availing services.

DG NIC, Dr. Neeta Verma, in his speech, remembered Dr. Sheshagiri who was the founder of NICSI, describing his great efforts and vision to take IT ahead in the nation. She mentioned that NICSI, during the past years supported a large number of IT initiatives of the Central Government, State Governments, Ministries, and Departments as well as States and Union Territories. She also highlighted how NICSI has transformed its business model from Desktop and Servers to Cloud-based Products and Services. She also mentioned "Tejas", a product that will give "Data Analytics as a Service" over the cloud.

Shri Prashant Kumar Mittal, MD, NICSI addressing the gathering highlighted the importance of the event. He mentioned the role of private and government industries behind the great success achieved by NICSI.

C. P. Gurnani, CEO & Managing Director of Tech Mahindra presented his views on the role of IT in India's new Innovation System. He appreciated the crucial role of NIC in making sure the private sector collaborated and created products that are persuadable for India. He also mentioned that today the best of the developed countries are struggling with their supply chain but India on the other hand managed during the Pandemic situation with the help of good leadership,  well managed supply chain, aptly trained workers, and good use of ICT solutions.

Ms. Debjani Ghosh, President, NASSCOM , in her address over video conferencing highlighted the role of IT in enabling Atmanirbhar Bharat. She mentioned how the country saw tragic suffering and loss due to the Pandemic but also gave the opportunity to solve the challenges with the help of technologies and IT. She mentioned the rise of several interesting technology trends like AI (moving from hype to reality), Natural language processing, Edge computing, SaaS, Cloud, Cyber Security, Remote Working, etc due to COVID.

A short Film on NICSI's Achievements and Journey in the past 25 years was previewed during the occasion.

The software products launched on the occasion by the Hon'ble Union Minister are Tejas, e-Auction, and Work from Anywhere platform.

Tejas, a Visualization Intelligence (VI) Tool, is an easy, powerful and affordable analytics data visualization tool. It is a complete data preparation and analytics platform which is easy to use with the power to integrate all data types.

e-Auction is a generic platform that is capable of handling the diverse requirements of the government which is an open auction, public auction as well as commodity auction. It is deployed in the NIC cloud and can be easily accessible by the user.

Work from AnyWhere platform facilitates government officials to access the applications enabling the official work activities seamlessly from anywhere. Officials can easily communicate and collaborate with their colleagues using text, audio, and video channels. Productivity apps like calendar, e-file, email, to-do list, task management, and the departmental applications are integrated with the portal over single login and API based alerts.

The welcome address and vote of thanks were given by Shri Prashant Kumar Mittal, Managing Director, NICSI. The delegates participated in the entire event with much enthusiasm.

Appreciation from Govt. of Assam to NIC Assam for valuable contribution in the fight against Covid…

In recognition of the work done by NIC Assam in the fight against Covd-19, the Government of Assam presented the certificate of appreciation in a ceremony on 20th February 2021…