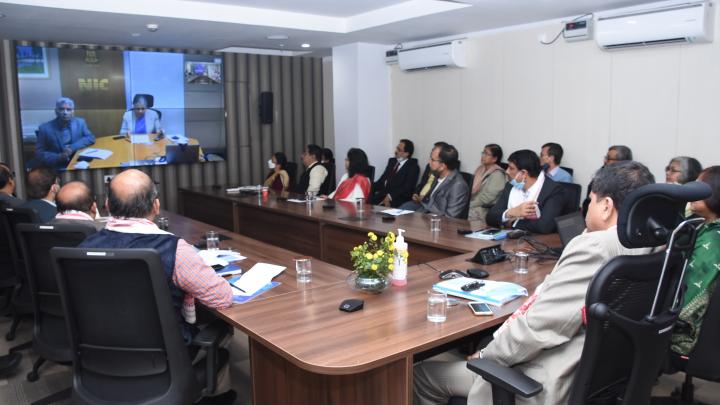 Smt Suchitra Pyarelal, Deputy Director General & State Informatics Officer, and team of NIC Project Heads briefed the Chief Secretary on NIC activities. NIC Assam has been offering ICT support and guidance to the Assam Government since 1988, and has been the pioneering organization for most of the State’s digital initiatives.

This was Shri Barua’s first stock taking of NIC work since he has taken charge as the Chief Secretary of the State. He went through a detailed presentation of NIC projects, services, products and new initiatives which are running in the State, and critically appreciated different aspects of each activity.

Commending NIC for its service to the State, he emphasized that crucial work such as building up a centralized human resources data base on which all departments could run various applications, creating an archival management system of cabinet notes, implementation of standardized applications for Assam Public Service examinations and recruitments, adoption of critical applications for location and tracking of commercial passenger vehicles, has to be taken up on an urgent basis.

He appreciated NIC for its successful efforts in standardizing all government web portals to enhance the experience of citizens in e-governance, implementing digital filing systems in government offices and its extraordinary support in fighting Covid-19 by developing a variety of applications and providing high speed video conferencing and networking facilities.

Commenting that the Transport and Excise Departments of the State are at the forefront of computerization and digital governance resulting in a high level of convenience for citizens, he urged NIC and his colleagues to give priority to online management of similar citizen service delivery systems such as Ease of Doing Business, citizens’ Right To Public Service, Public Distribution System, Pensions Processing, etc.

Taking a holistic view of the overall e-Governance approach, he expressed confidence that newly launched initiatives of NIC such as application system for development of rural areas, Digital Secretariat, eCabinet, digital dashboards for the Chief Secretary and all other departmental, project and district heads would find extensive utility and acceptance. He hoped that the State Government, together with NIC, would very soon make Digital Assam a practical reality.

The Himachal Pradesh Agriculture Produce Procurement Portal has been launched on 11th October 2021 by Hon’ble Member of Assembly from Chintpurni, Sh. Balbir Singh in Una. Sh.…