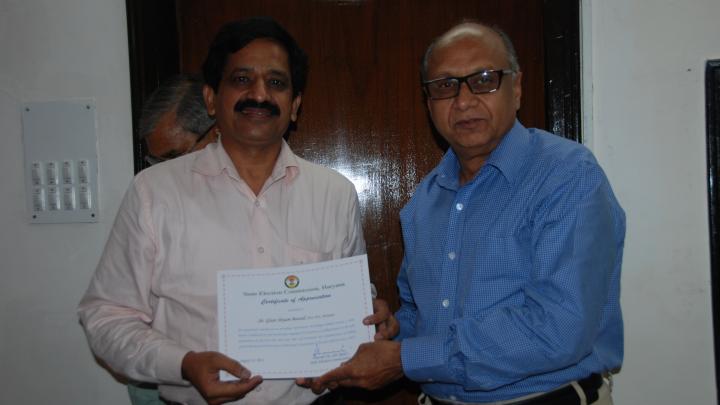 Sh. Dharam Vir, the State Election Commissioner  honored the officers of NIC Haryana for ICT support and  ITeS provided to the commission during, the general elections to the 07 Municipal Corporations.

1. Development of software for SMS based e-dashboard and election results information system.

2. Preparation of ward wise Voter lists and Printing of Voter slips with photo using latest ECI, Voters database as a base.

3. Uploading of GIS locations of all polling booths on web.

4. Handling of claims and objections through the use of Harsamadhan.

8. Duty assignment and randomization of poll staff and EVMs

9. ICT support to District Administration and ROs at District level.

During the function, Sh. Dharam Vir, State Election Commissioner, lauded the efforts of entire NIC team, for the development and implementation of various ICT applications which helped a great deal in conduct of elections in a free, fair and transparent manner.

The SEC, particularly praised the SMS based e-Dashboard application which was developed for polling day and counting day monitoring of polls. The dashboards provided complete overview of the elections to the administration, media and general public on web, for which a special web site was launched, ( http://mcelections.nic.in ). Data on this web site was updated through SMS, from polling booths on poll day and counting centers on counting day.

Sh. Srikant Walgad, IAS, the Chief Electoral Officer Haryana, also showed keen interest in the application and desired to implement the same in forthcoming Parliamentary & Assembly Elections in the state.

Guwahati, March 26, 2021: The Assam Police has become the second State Force in the Country to have automated and randomized its deployment for elections with the commissioning…