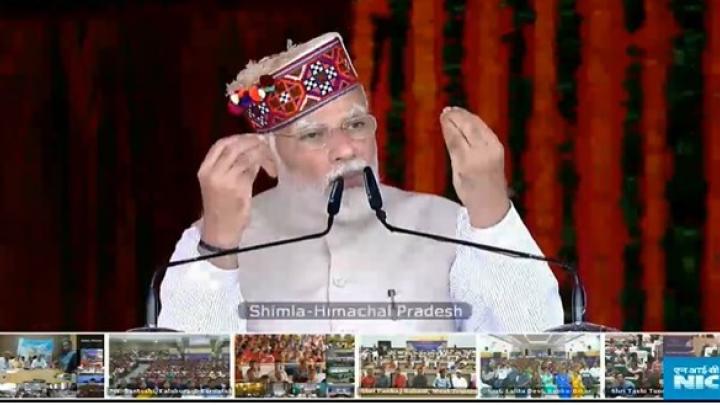 Sh. Narendra Modi, Hon’ble Prime Minister of India interacted with beneficiaries of various Government Schemes virtually using NIC VC. Hon’ble Prime Minister visited Shimla on 31-May-2022 for the Garib Kalyan Sammelan. He also released more than Rs.21 thousand crores as 11th instalment of the PM-KISAN to more than 10 crore farmers of country. He expressed satisfaction for releasing the financial benefits under the Pradhan Mantri Kisan Samman Nidhi scheme nationwide from Shimla. He congratulated and wished the farmers as more than 10 crore farmers have received the money in their bank accounts through the PM Kisan scheme.

During the event, he interacted with 6 beneficiaries of various beneficiary-based Government schemes.  He interacted virtually with Sh. Tashi Tundup from Ladakh, Smt. Lalita Devi from Bihar, Sh. Pankaj Sahani from West Tripura, Ms. Santoshi from Kalburgi of Karnataka, Sh. Arvind from Mehsana, Gujarat and with Sama Devi of Sirmaur, Himachal Pradesh in person at the venue site in Shimla.  Addressing the gathering on the occasion, the Prime Minister expressed his happiness to be present in Himachal on this momentous occasion.

This event was rare as the Hon’ble Prime Minister interacted with the beneficiaries directly from the stage of an outdoor event. The NIC VC facility was used for virtual interaction and broadcasting the event all over India through VC Studios and Webcast. The NIC VC Division from Delhi and NIC Team in Himachal Pradesh coordinated the successful completion of the event. NIC has also set up the PMO Control room on the Ridge. Sh. Dayanand Saha, DDG and HOD VC Division, Sh. Shailender Kaushal, TD from NIC Himachal Pradesh supported the event with their teams from Delhi and the venue site at Shimla.

A demonstration of end-to-end computerization of Arms Licence related services was made to Sh. Anil Vij, Hon’ble Home Minister and other senior officials of Home Department by…