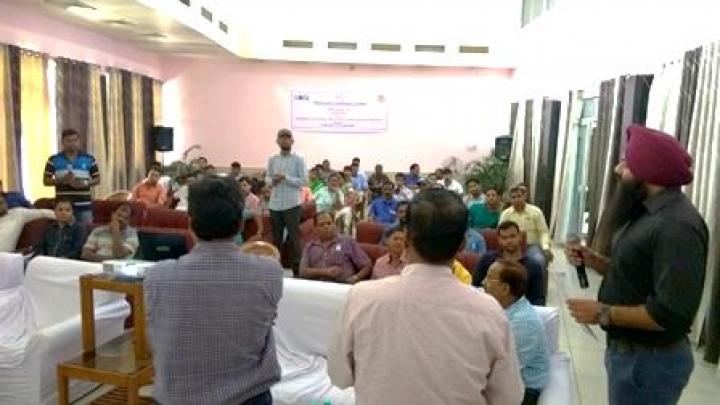 “Digital India” programme of Government of India seeks to transform India into a digitally empowered society and knowledge economy. As part of this programme, Deity / NIC / UIDAI have implemented Aadhaar Enabled Biometric Attendance System (AEBAS) in all Central Government offices. This initiative is now being extended to offices of all State Governments as well as Central PSUs. MCL, a pioneer PSU (Navaratna Company), has successfully implemented AEBAS at its Headquarters since 2015.

Addressing on the occasion, Director (Technical / Operation) mentioned that MCL presently have 22000 regular and 15500 contractual employees, all of which are to be covered under this system by the end of November’2017.

This shall not only prove to be another technological adoption of the rapidly modernizing company, but shall also help in ensuring about 3,00,000 man hours per day of operations by performing more than 75000 biometric authentications per day.

Director (Personnel) emphasized the importance of AADHAR and set a deadline of 15 days for complete registration of employees including Regular & Contractual in the AEBAS MCL Portal.

The concluding session on 15.9.2017 was addressed by Shri KSA Selvan, Dy GM (Telecom) / AEBAS Nodal Officer, MCL. He interacted with all participants in the Q&A session. Joining on the occasion, Directors appreciated the initiative and the support provided by NIC, Bhubaneswar and encouraged all the participants to implement and familiarize themselves with the system, which can prove to be a game changer in ensuring the punctuality of all employees

Guwahati, March 26, 2021: The Assam Police has become the second State Force in the Country to have automated and randomized its deployment for elections with the commissioning…

Appreciation from Govt. of Assam to NIC Assam for valuable contribution in the fight against Covid…

In recognition of the work done by NIC Assam in the fight against Covd-19, the Government of Assam presented the certificate of appreciation in a ceremony on 20th February 2021…

‘Ease of Doing Business in Assam’, a flagship initiative of Government of Assam developed by NIC. Assam bagged the 18th CSI SIG eGovernance Award, in the Project Category –…